How are diseases named?

Is there a general rule for naming human diseases? No. Here is a list of some of the many ways by which diseases get their names.

1 As an an expression of a characteristic pathologic process (e.g., muscular dystrophy)

2 For the physical agent that produced the disease (e.g., plumbism)

3 For a group of people who were at high risk for the disease (e.g., Legionnaires' Disease, named after a group of conventioneers who succumbed in an early outbreak)

5 For a geographic region in which occurrences of the disease are concentrated (e.g.,Tangier Disease from Tangier Island, Maryland)

6 For the geographic spot from which a widespread epidemic emanated (e.g., Lyme disease from Lyme, New York)

7 For a striking clinical feature of the disease (e.g.,sleeping sickness) )

8 As a crude and insensitive comparison to an non-human object (e.g., gargoylism, ichthyosis with confetti, happy puppet syndrome)

11 For a patient who had the disease (e.g., Lou Gehrig disease)

13 As a witty but unhelpful acronym (e.g. CATCH 22 = cardiac abnormality,abnormal facies, t-cell deficit due to thymic hypoplasia, cleft palate, hypocalcemia resulting from a deletion on chromosome 22)

14 As a trope or descriptive metaphor from any existing language (e.g., Moyamoya disease derives from "moyamoya" meaning "puff of smoke" in Japanese,for the characteristic tangle of tiny cerebral vessels seen on x-ray)

16 As a somewhat obscure and trivial fact that would be understandable only to experts (e.g., one and a half syndrome, which refers to a specific neurologic condition in which one eye acquires movement deficits, while the other eye acquires half of those deficits)

This list was taken from my book, Biomedical Informatics (List 7.3.1).
In June, 2014, my book, entitled Rare Diseases and Orphan Drugs: Keys to Understanding and Treating the Common Diseases was published by Elsevier. The book builds the argument that our best chance of curing the common diseases will come from studying and curing the rare diseases. 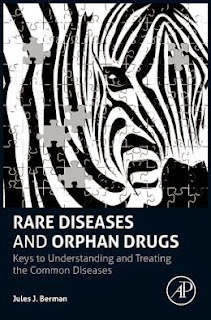 I urge you to read more about my book. There's a generous preview of the book at the Google Books site. If you like the book, please request your librarian to purchase a copy of this book for your library or reading room.